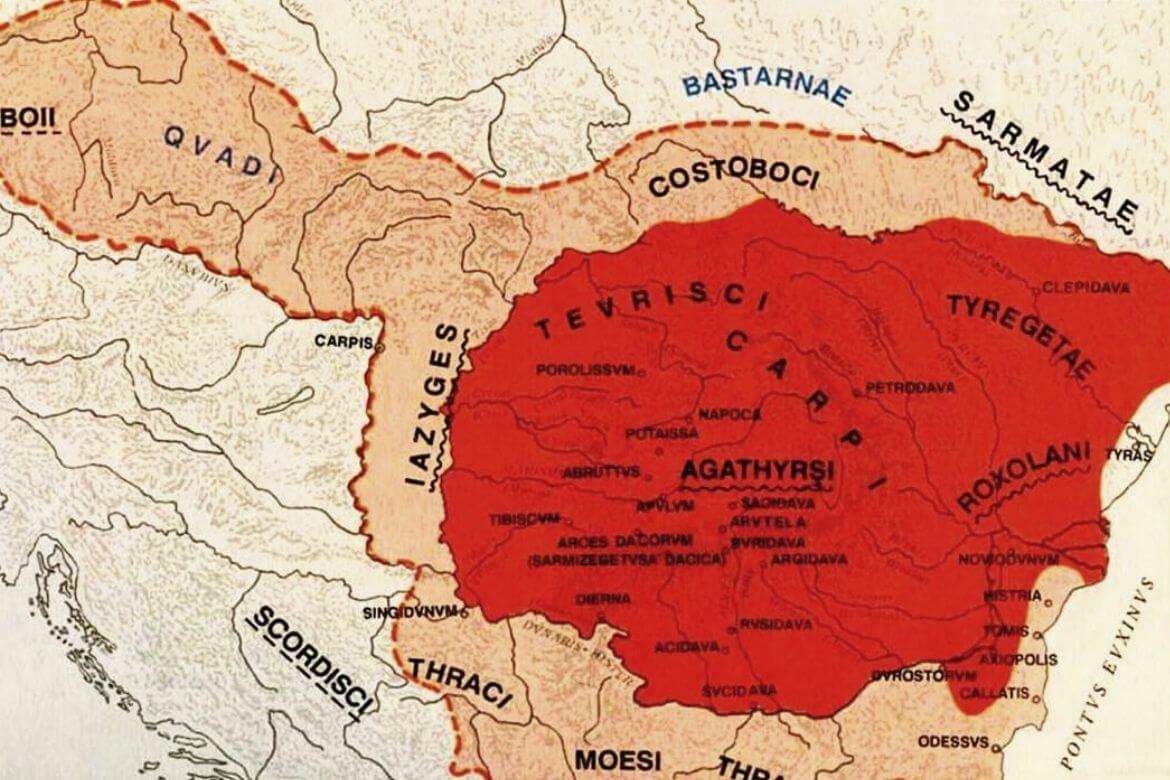 In a vast areal that stretches from the Italian Peninsula in the west to the Crimean Peninsula in today’s Ukraine to the east, and from Greece up to Poland and East Germany (DDR), that had The Carpathian Mountains as the backbone, once lived a people called “agathîrși” (in Romanian) and their empire was called The Agathîrs Empire.

The information in this article comes from the archives of The Dragon Knights’ Order, a very old secret order, also known throughout history as The Brotherhood of the Thracian Kings.

Where Is Agartha Located?

According to the last king of the Agathîrs Empire from above ground, Valentin Thrcaar the XVII-lea or Valentin Tîrcă after his Romanian name, the Carpathian Mountains are an artificial construction that have been built millions of years ago by extraterrestrials coming from The Draco Constellation. This is the heart of The Agathîrs Empire or Agartha. The Carpathian Mountains that are in the shape of The Darco Constellation, resembling a dragon, stand as proof.

His theory explains the name of the famous Romanian (Vallachian) ruler Vlad the Impaler, also known as Vlad Dracul, or Drăculea (Dracula). The Romanian word “drac” doesn’t have an exact translation into English, but it means “small mischievous devil“. As for the English word dragon, the Romanian language has a very special word that is “balaur“, which is a mythical creature in the Romanian folktales. The name of the Dacian king Decebalus seems to have come from “dece” (zece, meaning ten) and “balus” meaning “balaur”, namley dragon.

Alien constructions that archaeologists have yet to explain and mysterious events happening in the Carpathians start to make more sense now in the light of this new information. The most notable are the ones enumerated below.

In his book “The Gospel by The Agathîrs King or Beyond The Catholic Truth” Valentin Tîrcă explains that the land inhabited by Romanians today was called The Agathîrs Empire, a peaceful land we now know as Agartha. Dacians were the military wing of the Agathîrs people, according to his tale.

Agarthan people were the result of the breeding between aliens from The Darco Constellation and the natives of these lands. He also explains that most part of the Agarthan civilization today dwells in the underground after a 12 minutes earthquake at the beginning of the 19th century has sealed the exits to the outside world.

There’s a lot to say about this magnificent civilization, so I have tried to summarize the most important information below.

It was a place where everyone was living in peace and love. In Romanian, there is an old saying “Pe-un picior de plai, pe-o gură de rai”, which translated to “Near a low foothill, at heaven’s doorsill”. This is exactly what Agartha was like. The way of life and the beliefs of its inhabitants were similar to those of ancient Lemuria.

The land was a lush forest, basking in life and riches. Today Romania has the last virgin forests and the last wild bear population in all of Europe. Most of the people today native to these lands (150 km radius from the Carpathians) are descendants of the Agathyrsi.

The Agathîrs people were vegetarians, they didn’t eat meat and didn’t drink alcohol. The reason is that they knew that alcohol was poisoning their minds and made them act foolishly. When vine culture become popular, Deceneu, one of the most remarkable Dacian rules (pre-Roman conquest) ordered the burning of all vines so that they could not make alcohol from grapes. Agarthans were mostly farmers, gatherers, beekeepers, and shepherds, and they lived in great communion with their livestock and nature.

3. They Were Masters of Gold & Pottery

Agathîrs people were also masters in pottery. The most notable works of the Agathîrs artisans are depicted in the findings of the Vinca-Turdaș culture, Hamangia, Cucuteni–Trypillia culture, Gumelnița–Karanovo culture, and Boian culture, but there are many more others.

Agarthans were also masters at exploiting precious metals and crafting objects from gold. This is because Agartha had great amounts of gold in its undergrounds. The countless gold vestiges discovered on the territory of Romania today, such as the Pietroasa treasure and The Dacian bracelets stand as proof. Agartha was a very rich territory, not just in gold, but also in spirituality. This is reflected in the bounty and variety of the Romanian folklore, craftsmanship, stories and traditional wear and at the same time in a very solid Romanian language unity, that has not been split into too different dialects, unlike Italian, French or Spanish.

4. Their Laws Were Gentle – The Belagine Laws

The Belagine Laws, (“legile blajine” – the soft/kind laws) seem to have been their creed. Agarthan rulers sat in a circle at a round table, signifying that they are all equally important. The circle is a symbol of the sun, representing their solar culture, that we still see today in the Romanian folk dance called “horă” where people hold hands and dance in a circle. This dance is also popular in the entire Balkan region, but not in western Europe. In most patriarchal cultures today we have the symbol of the triangle, also depicted on the US dollar, which is the opposite from the circle. The triangle is a form of ruling where most people are ruled by a few, while in the circle, all are equal.

Their healers believed that in order to heal the body, you need to heal the mind first and the whole, not the parts. Hence, they practiced a spiritual form of holistic medicine. Hippocrates himself wrote in his books about a Thracian doctor who taught him this way of healing. Today, Romanians still heavily rely on home remedies, made after recipes that have been passed through word of mouth from generation to generation. Marigold balm, chamomile tea, or comfrey tincture are medicines you will still find in most Romanian households these days.

6. They Had The Oldest Language in The World

The writing discovered on the territory of today’s Romania is the oldest yet discovered in the world (see Tartaria Tablets), even older than Sumerian. We can still see the Agathîrs people writings on the Sinaia gold tablets, a set of 200 mysterious gold tablets that have been excavated at the construction site of the Peleș Castle in Sinaia, in the late 19th century. Up to this day, the language/writing on the tables has not been decoded or deciphered completely.

Agarthans have never started wars to conquer new lands but always fought to defend their territories, knowledge and culture. This is perhaps because they were a matriarchal society, built in a beehive structure, where each individual contributed and was equally important, and no one was left behind. Women ruled with love, respect, and compassion. Indeed, Agartha was a society where everyone took care of everyone else, with less ego-driven people, violence, and wars, that we see in most patriarchal societies today.

How and Why Did Agartha Dissapear?

In time, this peaceful society has been infiltrated by lower vibrational beings, meat-eaters, and alcohol drinkers, who south to conquer these lands and establish their rule here. The Roman Empire was one of these corrupt organizations looking to conquer and destroy these sacred lands, known for their lustfulness in the lower aspects of life.

The history books of today, depict The Romans as a great civilization, but is this accurate?

Far from it. Let’s not forget that history is written by the winners, set to conquer, assimilate and destroy other territories, and not preserve peace. They write the history as they please, not how it actually was. This is why history praises the criminals and vilifies the peaceful communities calling them barbarians. But the truth will soon come out into the light.

Agartha has been “destroyed” through spiritual and cultural infiltration.

This was not a fair battle, to say the least, as with most conquering empires across history. The minds of the Agathîrs people were enslaved and perverted, and all that they had sacred and pure was soon buried and forgotten. At least for now.

Agartha was a highly spiritually advanced society located on today’s territory of Romania, and neighboring lands. Its stretching was vast, encompassing most of the Balkan region, parts of Italy, and even East Germany (the staggering similarity between dutch and daci – dacians).

Its downfall was due to the infiltration of nefarious entities (we also know as Illuminati) wanting to install a New World Order by perverting the good in people’s hearts. What we see today in the world is a reflection of this spiritual battle, which seems to have been won for now by the forces of evil. But the battle is far from over.

Agartha never died, on the contrary. We see glimpses of it in the old Transylvanian villages, where hospitable people happily invite strangers into their homes, to feast at their table. It’s in the kindness of the heart. Agartha will rise back again and this will change the world as we know it from the ground up. The good always wins.

Inside the Earth- The Second Tunnel
$20.53
Buy it here

Sources:
Valentin Tîrcă – “The Gospel by The Agathîrs King or Beyond The Catholic Truth”
Radu Cinamar – Inside the Earth: The Second Tunnel
Mat Copeland – The Sinaia lead plates – Understanding the lead tablets written
in the Dacian / Thracian language
Constantin Olariu Arimin – The Carpathian Civilization
Agartha Code 777

The 8 Teachings from Zalmoxis’ School of Spiritual Mastery