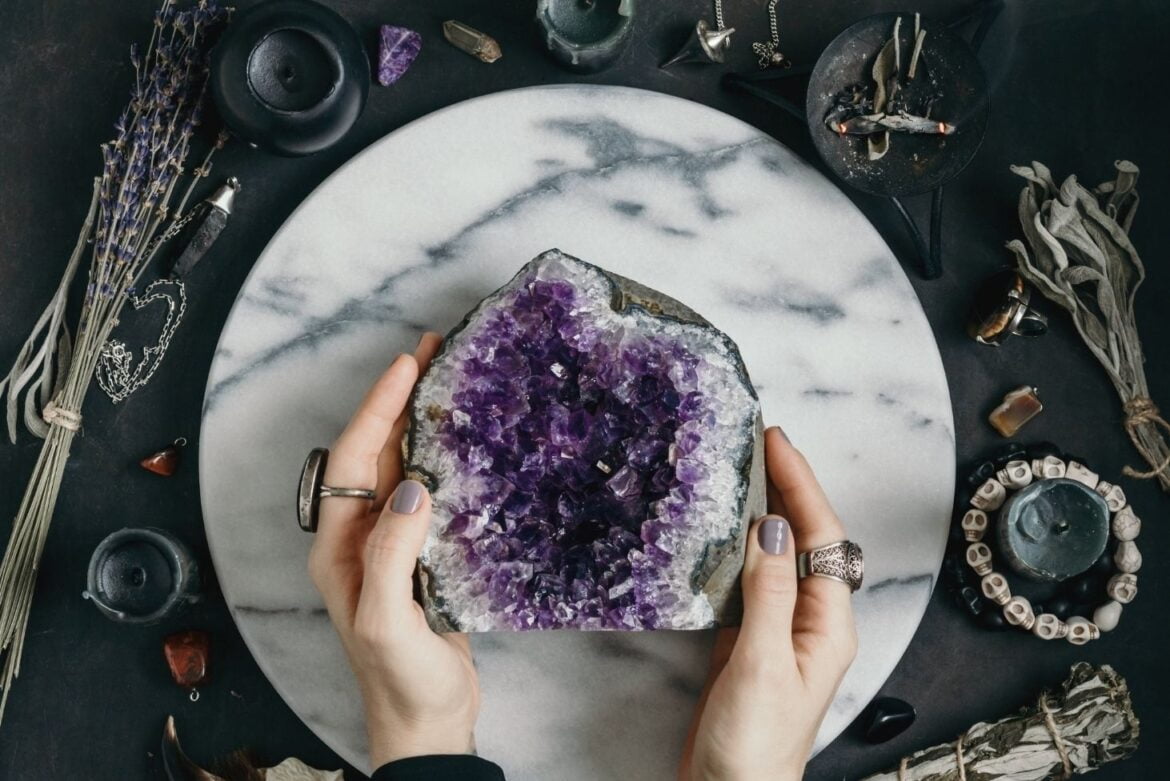 Famous German nun, Hildegard von Bingen was born in Germany in 1098, in a very turbulent period in human history. European kingdoms were falling apart making way for the first crusades against Jerusalem.

Ever since her birth, Hildegard had amazing psychic and healing abilities and has become famous for her predictions and miraculous healings.

St. Hildegard was also a great connoisseur in the use of plants, herbs, and gemstones that she used in secret concoctions to heal the body and the soul. She even dies on the day she predicted: September 17, 1179, surrounded by the nuns from her monastery, who witness another miracle: the sky lit by two rainbows in the sign of the cross.

Through her writings, St. Hildegard left us many uses of plants, healing crystals, and many other natural elements.

The 12 Healing Crystals for The Soul – St. Hildegard’s

There are many varieties of agates, of all colors. The one chosen by St. Hildegard, although common, is very precious: Sardonyx. This is a brown, white, or orange agate stone, which is found in Sardinia, where its name comes from. What makes this healing crystal very attractive are the beautiful details and natural geometric figures that web its surface. In the Orient, this stone is considered the protector of the house.

St. Hildegard believed that sardonyx stimulates a clear hearing and a better perception of sounds, which makes it one of the best healing stones for musicians, who want to create.

St. Hildegard: “Agate always stimulates the five senses of man. For each of them, it can become a true remedy.”

It is a light blue stone, a variety of crystallized beryllium. Today’s practitioners claim that aquamarine emits vibrations that induce relaxation. It is one of the most healing crystals for the entire ENT sphere, mouth, jaws, sinuses and ears. Aquamarine is said to be particularly effective against allergies, that affect on the throat or chest areas.

For Hildegard, aquamarine had an especially protective effect, for example against poisoning, but also against your own self, when you let yourself be taken over by a low vibe.

This beautiful purple stone has a reputation for fighting addictions and all drug poisoning: tobacco, alcohol, narcotics, and so on. It calms, and promotes the relationship between man and woman, and also stimulates imagination and creativity. If you often have nightmares, put some raw amethyst stones on the pillow. Amethyst is one of St. Hildegard’s most healing crystals, it promotes sleep, relieves stress, soothes anxiety, and prevents mental breakdowns. She used amethyst to soothe the skin, as natural skincare.

St. Hildegard: “Amethyst is solar and aerial in nature, it helps you radiate joy from within and ease the heart.”

Chalcedony is a beautiful stone, in milky gray tones, sometimes showing a shade of blue or pale purple, and is considered to be endowed with powers that fluctuate between vigorous and gentle. It calms anger, as well as agitation, and burnout and can helps one find tolerance. Chalcedony is recommended for nervous problems, as well as in diseases related to the mouth, throat, ear, thyroid, and even for tooth pain.

St. Hildegard believed that chalcedony can help cleanse the blood and relieve the heat in the body and charge it with positive energy.

St. Hildegard: “Chalcedony removes weakness, but also protects the nervous man from uncontrolled irascibility. His behavior will become so peaceful that there will be no one who can infuriate him, rightly or wrongly.”

Clear quartz is considered one of the strongest healing stones in lithotherapy (crystal healing). In general, rock crystal is used in two ways. First, to amplify the properties of another stone (when associated, for example, with chalcedony or emerald). But its favorite area of action is to amplify intelligence, memory and the spiritual side.

Hildegard van Bingen gave it other uses, namely, she used this quartz to cure eye diseases and vision loss, neck tumors, thyroid problems, and heart problems. In all cases and for all ailments, she advised that the crystal be left in the sun to warm up, and then placed on the diseased area.

With shades of red, orange, and brown, hyacinth contains radioactive elements and must be used with caution. Do not wear it permanently. Hildegard recommends hyacinth in the fight against tumors and infections, especially eye infections. It must not be worn or used (like other red stones) by people who are easily irritable or tensed.

St. Hildegard: “If someone has the sensation that his/her vision is dark or ulcers appear in the eyes, expose a hyacinth crystal to the sun, then keep it in the mouth for half an hour, and thus, well warmed and moistened, put it on the eyes immediately “.

Closely related to the agate, jasper can be red or black in color adorned with zebra veins. The most potent is the red jasper, especially for stimulating sexual functions. Jasper strengthens the charm, as well as the seductive or emotional side of the person wearing it. As a nun, Hildegard says nothing about the sexual effect of jasper, although she recommends it to boost warm, loving feelings. It is one of the top healing crystals for rheumatism, heart, or kidney problems.

St. Hildegard: “Jasper is a strong stone with many virtues, including its ability to ward off evil spirits during childbirth.”

Onyx is made of alternating black and white layers, and it is believed to have a balancing effect. It is used, therefore, when you feel hesitant or in convalescence. But because it also acts on the moods, prolonged contact with onyx is not recommended (risk of depression or drowsiness). According to the German nun, this stone has many recommendations: blurred vision, problems with the heart, stomach, or lungs, and even sadness. But this is not just one of the most potent healing crystals for the body, but also for the soul.

St. Hildegard: “Onyx contains the heat of the air passed by a ray of sunshine. It is very powerful to cure all diseases that come from the air.”

A magnificent and very precious stone, emerald is originally beryllium from the same family as aquamarine. Emerald is a natural brain stimulator, it activates the memory, and enhances the ability to focus during work. It is not just beautifully-looking, but also one of the most healing crystals for the soul because it relieves emotional suffering. According to St. Hildegard, the emerald is proud and solitary, so it must not be worn with another gemstone, otherwise, it loses its strength.

St. Hildegard: “The one who suffers from heart, stomach or the right side of the body to wear an emerald. And if these sufferings overwhelm him and he can no longer get rid of them, immediately put an emerald in his mouth, to moisten it with his saliva. Then rub the sick areas with it and the suffering will stop.”

Sapphire is one of the most healing crystals for the soul, helping those who want to develops creative abilities, work their imagination and also extra-sensory faculties. The darker the stone of the sapphire, the more potent it is. Sapphire soothes eye pain, migraines, neuralgia, and insomnia.

For St. Hildegard, sapphire is a true stone of virtue. She says that sapphire, mounted on a gold ring, provided it is pure gold, adds to its beneficial properties. Wet with saliva, it can be applied to diseased eyes. Held in the mouth for a few minutes, sapphire cures rheumatism, anger and jealousy. The saint especially appreciated this protective stone, and often used in magical rituals.

St. Hildegard: “Sapphire is omnipotent. Although it looks cold, its nature is fiery and it represents generosity and wisdom. “

Diamond is the most precious of all stones and, at the same time, the purest, strongest, but also the most dangerous. Misused, it can cause serious shortcomings, even catastrophes. In order to use it, you must be pure yourself. Diamond is used for closing wounds (real ones, but also mental or emotional ones), to cure madness and fever, but also eye problems. This is why a diamond is one of the most healing crystals for the soul. It can even moderate indulgences (sexual, food, drugs). It is considered the stone of wisdom, a stone that amplifies that which is within.

St. Hildegard: “Diamond is of a hardness that no other hardness can overcome. Its virtue and strength are so great that they can stifle evil and wickedness.  “

Very invigorating, imperial topaz acts directly on our emotions, which is why it’s often referred to as the “stone of love.” In fact, it has a beneficial influence on human sexuality. Imperial topaz is used in case of mental fatigue, poor blood circulation, general weakness, or lack of appetite. St. Hildegard, who considered it the strongest of all gemstones, recommends imperial topaz in many diseases: leprosy, liver problems, poor eyesight, fever, poisoning.

St. Hildegard: “The topaz is clear, with a clarity that makes it look like water. By its color, it looks more like gold than silver. Topaz is the strongest of all gemstones .”

How to Choose the Right Healing Crystals

Healing crystals come raw or cut in the shape of jewelry, and some of them are even carved (jade, obsidian) in the shape of statuettes, spheres, or eggs. This is not important. However, it’s best to avoid the old statuettes, which were used as objects of religious or other sorts of ritual. Opt for “new”, unused stones. The purer the stone, the stronger its shine. Avoid polished healing crystals, instead, choose raw stones.

How to Use Healing Crystals According to St. Hildegard

Place the healing crystals under the pillow in your bed, hold them in your pocket, and – according to Hildegard’s instructions – keep them in the mouth, for 15 minutes. Usually, healing crystals are used by contact, in the promiscuity of the diseased organ.

Hildegard also recommends that we keep the crystal in water or wine, after heating it in the sun. Today, we know more about “programming” water or the synergy between the stone’s vibration and the sun. Current lithotherapy practitioners keep the healing crystals soaked in olive oil mixed with herbs, a different type of plant oil for different gemstones, to boost their healing properties.

To recharge healing crystals, it is enough not to wear them for a few weeks (wear another one meanwhile). Stones recharge naturally when they come in contact with other stones of the same kind or color. Or, even simpler, by exposing them to the sun, the full moonlight, or keeping them in sea salt.

Today, lithotherapy – healing crystals therapy – is a branch of alternative medicine that has invaded the occident. The empirical method of healing with crystals practiced for centuries in the Far East has entered California in the 1960s, making it appealing to hippies and followers of the New Age.

Read Also: 9 Crystals for Attracting Love & How to Use Them

“Precious stones are born from water and fire. That is why they contain both heat and humidity. Rich in virtues and powers, they are useful in all sorts of ways… The sole nature of these healing crystals makes them generate only positive and useful effects.”