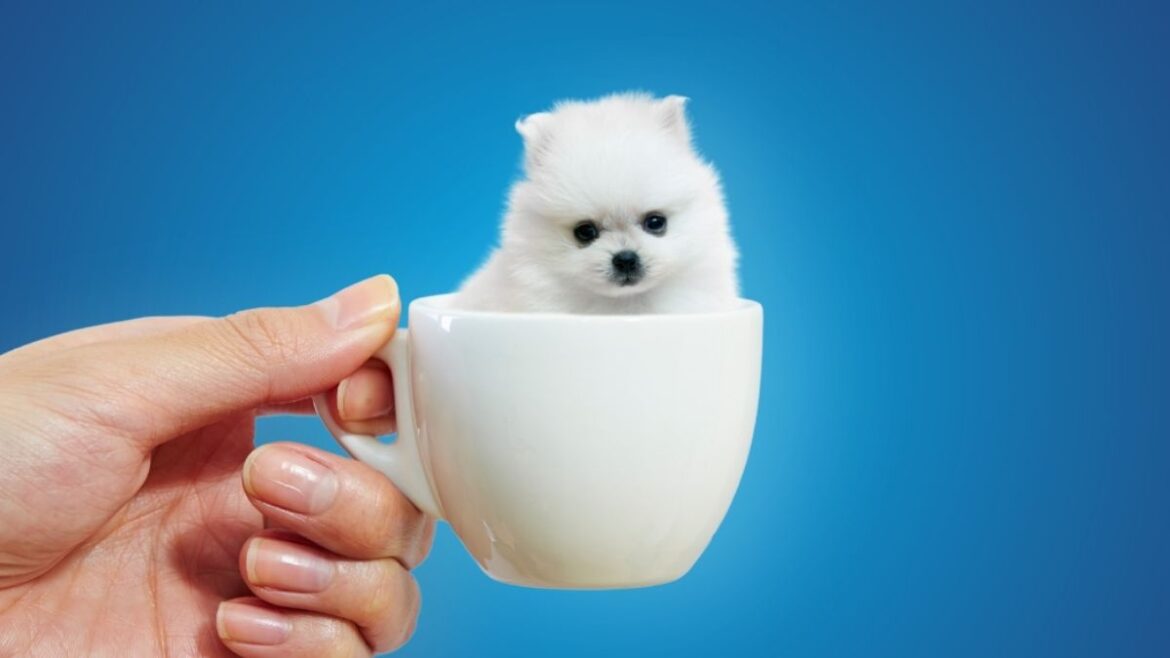 Want to learn all about teacup pomeranian puppies, from price, lifespan to care basics, and what to expect when getting a teacup pomeranian? Continue reading this article and find all this out, and more.

Pomeranians are the fluffiest, most elegant, and yet some of the most fierce of the pups. The teacup Pomeranian puppies are one of the most sought-after pocket dog breeds in the world. The reason is that these tiny pups are ridiculously cute, easy to take with you as they fit most handbags, and fluffily adorable, hence their nickname “Pom” or “Pom Pom”. But before compulsively buying a teacup Pomeranian puppy, here are a few things to consider.

What You Need to Know Before Buying a Pomeranian Puppy

Similar to Chihuahua puppies, the Pomeranians have a personality that makes for their small stature. This is why you will oftentimes see a Pom fight back and defend their owner with their dear life. This makes a Pomeranian dog sometimes excessively protective towards its owner. More so, the pom is usually very alert and will bark at the slightest changes in its environment, especially at strangers passing by. In relation to children, teacup Pomeranian puppies are not recommended for families with very young or very active children, because they can perceive children as predators, and can engage in an attack. So be aware!

Like most tiny dog breeds, Pomeranians can become overweight, and therefore, a Pomeranian puppy requires a balanced diet and a lot of movement. It is also prone to diabetes, so specialists recommend the utmost caution in establishing a proper diet, which must be done by specialized personnel, as their digestive system can be extremely sensitive. As it ages, a Pomeranian may become bald in certain areas of the body.

Pomeranian puppies respond well to commands and are easy to train because they are very intelligent animals and quick learners. In actuality, training a Pomeranian is a must as they learn the basic commands easily. Avoid scolding or punishing them for not responding to commands because the pom may not understand what is happening to him. They learn easier when they are praised and rewarded for their little progress. They do not feel well around children.

How Much Do Teacup Pomeranian Puppies Cost?

In addition to the price of the teacup Pomeranian and the costs of the initial accessories (bowls, collar, harness, leash, toys, blankets, bedding, brushing tools, and car transport cage), there are also regular costs, such as routine veterinary consultations. If the Pomeranian becomes ill, the costs can increase substantially.

Where Can You Find Teacup Pomeranian Puppies for Sale?

If you’re a US resident, look for an AKC Pomeranian breeder, that is a breeder who has a registration certificate from The American Kennel Club for his litter of pups. This assures you that the Teacup Pomeranian you want to buy meets breed standards.

You can find Pomeranian puppies for sale by doing a search on the AKC Marketplace. If you’re from other places around the world, look for local breeders. Other sites that sell Teacup Pomeranian puppies that we recommend are Teacup Puppies, Micro Pomeranian Puppies (both sell affordable Pomeranian teacups), and FouFou’s Puppies if you want to go all in.

A good alternative is adopting a Pomeranian, which is less expensive than buying and it can help save a life. You can either check adoption websites or go to your local shelters and see if they have Pomeranians for adoption. This is not as rare as you may think.

How to Care for a Teacup Pomeranian Puppy?

Small dogs breeds can be very demanding when it comes to their care routine. This is the case for Teacup Pomeranian puppies too. Compared to regular Poms, these newly born tiny beasts weigh less than one pound (453 g). When they reach adulthood, teacup Pomeranians weigh between 3 to 7 pounds (1.3 – 3kg) and are between 7 to 12 inches (17 – 30cm) tall. Hence, this is a high-maintenance tiny dog.

Teacup Pomeranian puppies need little food, but good quality food. Make sure there is a high percentage of meat in the pup’s diet. Whether you decide to feed it wet or dry food, meat should be the top ingredient on the list. Avoid dog foods with grains. If you want to cook for them, a meal consisting of rice, meat, and a little bit of carrot is ideal for most dogs.

Despite its size, a teacup Pomeranian is rarely lazy and actually enjoys long walks at a moderate pace. If the weather is bad, he is satisfied with a short outing. In this situation, you can easily pick them up and carry them, for instance on staircases or on muddy terrain. Teacup Pomeranian puppies enjoy playing ball but use a ball adapted to its small size.

Pomeranian dogs have a double layer coat, one thick coat underneath, and a longer and straight hair coat over, which makes them look like fluffy hairballs. This means that teacup Pomeranian puppies require good grooming at least once a week, especially during shedding.

Due to their thick coats, teacup Pomeranian puppies do not like high temperatures or high humidity. Thus, using a fan to cool the pup down when indoors can help, as well as not overexerting them to play during heatwaves.

What Is The Lifespan of Teacup Pomeranian?

Pomeranians can live up to 12 or even 16 years.

Where to Buy Accessories for Teacup Pomeranian Puppies?

Teacup Pomeranian puppies are friendly, full of life, and extraordinary extroverted dog, who loves to be close to their master and their pack members. Poms are also fun and loyal, feisty, and super-adorable. If you’re faced with the decision whether to get a Teacup Pomeranian or not, consider the responsibilities that come with it, especially if you’ve never had a dog before.

Dogs are men’s best friends, and this is what they should get in return from us, the best human friend to cherish and love for a lifetime.