Home Alternative Living 9 Christmas Smudge Blends You Can Make Yourself

9 Christmas Smudge Blends You Can Make Yourself 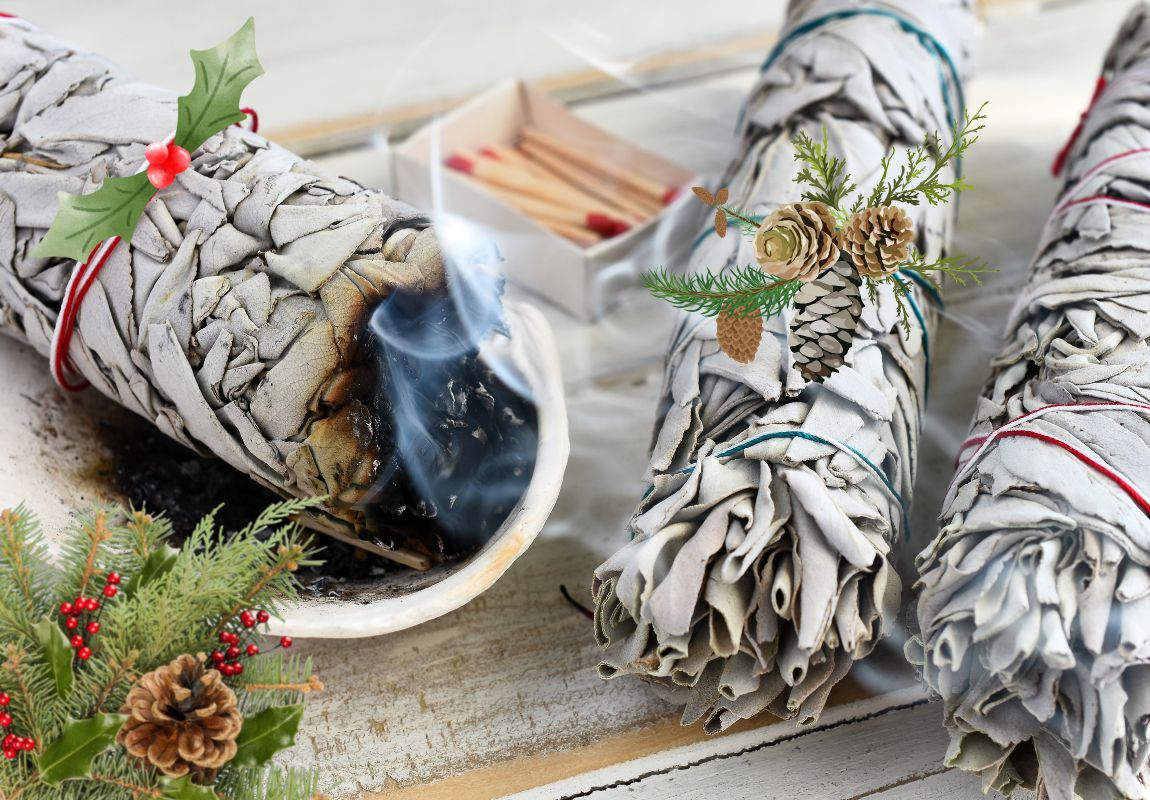 Christmas smudge blends can be an amazing gift idea for that spiritual friend who needs to up the vibe of their home, ditch out any negative energies, and feel better overall. Smoke cleansing is a popular cleansing ceremony before Christianity, practiced at the big events of the year. One of these events is the winter solstice which almost coincides with the Christmas holiday. Without further ado, here are the most amazing Christmas smudge blends you can make at home and offer as gifts.

Chop the dry ingredients and combine together well. Store the smudge blend in a beautiful tin box, and keep away from moisture. Burn a few pinches of these herbs in a metal, stone bowl or a cauldron and smudge the smoke throughout the house, whenever you feel the need to cleanse and remove bad energies and lift up the vibes in your home.

The needles, cones, and resin of the spruce have long been used for smoke cleansing together with other conifers such as fir. This was long before incense, myrrh, and other precious elements were brought to Europe from other parts of the world. In the past, when incense was rare, fir spruce and resin were used for smudging during religious ceremonies in mountain villages.

Instead of the resin, you can also use dry fir or spruce needles and cones for smudging.

The main role of spruce and fir smudging is to purify the air in the house. Simply burn spruce or fir branches in the stove or burn spruce of fir needles in a cast iron pan on the stove. On the physical level, they help disinfect the room both during an illness and during the convalescence period. On an energy level, spruce or fir smudging cleanses the energy of the house from oppressive and gloomy feelings.

Smoke cleaning with pine resin is believed to ward off disease, trouble, and all evil spirits. Pinewood, resin, cones, bark, and needles have similar properties when it comes to smoke cleansing, but are more discreet when compared to spruce. When you use pine for smudging you will feel how a soft and pleasant heat penetrates your body, which cleans and disinfects, unties, and opens. While spruce smudging banishes gloomy and angry moods out of the room, pine smoke cleansing makes sadness and melancholy turn into a calm, conciliatory joy in just a few moments. The soul awakens gradually from the sleep of sadness and finds its way back to its natural state of joy and happiness.

Closely related to the cypress tree, juniper is a natural source of phytoncides and ozone, as it disinfects and sanitizes the air. This is why in old times people lit juniper twigs in the rooms where sick people lived to elevate the vibration and promote healing. Modern research has confirmed the beneficial effect of smudging infected spaces with juniper twigs. Juniper smudging is a great way to disinfect and deodorize closed spaces such as attics, cellars, or other rooms and outbuildings of the household.

Common yew is another one of the most powerful Christmas smudge herbs that you can use for smoke cleansing during the winter solstice. According to famous medieval nun Hildegard van Bingen,

“The yew tree is more ‘cold’ than ‘warm’, it is also dry and symbolizes joy. When the wood is lit, neither the vapors nor the smoke it gives off are harmful. People suffering from colds should inhale – through the nose and mouth – the smoke of burning yew wood and thus the “evil” will disappear from the body without any negative effect”.

For this Christmas smudge ritual, you need a few yew chips, hot coals, or a very hot iron plate. Put 2-4 chips of yew wood on smoking coals or on the heated iron plate, and inhale the smoke that comes out through the nose and mouth for about 5 minutes. You can repeat this smoke-cleansing ritual several times a day.

If you want to enjoy the new winter solstice energy a smudging ritual with a blend of dried basil, hyssop, and elecampane. Put burning coal in a bowl, let it turn into embers, then sprinkle a small amount of the herbal blend on top. Take the bowl in your hand and walk around the room, spreading the smoke with a paper fan. Imagine how your dark thoughts and negative feelings are shattered, chased away by the aromatic cleansing smoke. When the coals go out and no longer smoke, open your windows and ventilate the room well.

Or, make a bundle out of dried basil, hyssop, and elecampane sprigs, tie them together with a string, and light up one end. Blow out the flame and allow the smoke to invade every corner of your room. After finishing, air the room and enjoy the new, uplifting vibes.

Quince is one of the most representative Christmas fruits. Although it is ripe in autumn, quince has been used to adorn the window sills and cupboards of homes in Eastern Europe since times immemorial. One of the reasons is that quince is considered a symbol of love and fertility. Nowadays Christmas smudge with dried quince peels and flowers is still performed in some parts of Europe. The purpose of this cleansing ritual is to purify the house, especially after a painful event, but also with the intent of attracting prosperity and the priceless gift of fertility.

This is a powerful Christmas smudge blend from Scandinavia used to attract new love energies during the winter solstice. In Scandinavian mythology, the ash tree is called Yggdrasil and is the sacred, gigantic tree that supports the entire universe, gathering nine worlds between its branches, or nine planes of existence. Here, they believe ash seeds (samaras) have powerful aphrodisiac properties. If you’re single and looking for your significant other during the holidays, this smudging may be for you. For this Christmas smudge blend, you need:

Combine equal amounts of the herbs above and grind them roughly in a mortar. Put a little bit of sand at the bottom of a fireproof bowl or cauldron. Light up a piece of coal and place it on top of the sand in the bowl. Sprinkle the dried herbs on top of the hot coal. Smoke the entire room with this scented smoke thinking about the love that you want to invite into your life. Then air all rooms well. Other love herbs that you can use in the blend are lemon balm, cardamom, cinnamon, ginger, and vanilla.

In the Romanian tradition, wormwood is widely known both as a magical plant and as a medicinal herb. But in addition to its amazing healing properties, wormwood is also a powerful herb for Christmas smudging. How to use wormwood for Christmas smudge? Simple. Tie a bundle of dry wormwood stalks with a rope into a smudging stick. Light up the tip of the stick and allow it to burn smolderingly so that the wormwood smoke envelops the room. This Christmas smudge herb is used to ward off negative entities, but also for disinfecting the home and killing off unwanted dwellers such as cockroaches or fleas.

9 Amazing Psychedelic Mushrooms that You Can Forage Yourself

9 Crystals for Attracting Love & How to Use Them

9 Most Delicious Wild Mushrooms You Can Forage Yourself

3 Good Reasons to Become a Minimalist in 2023