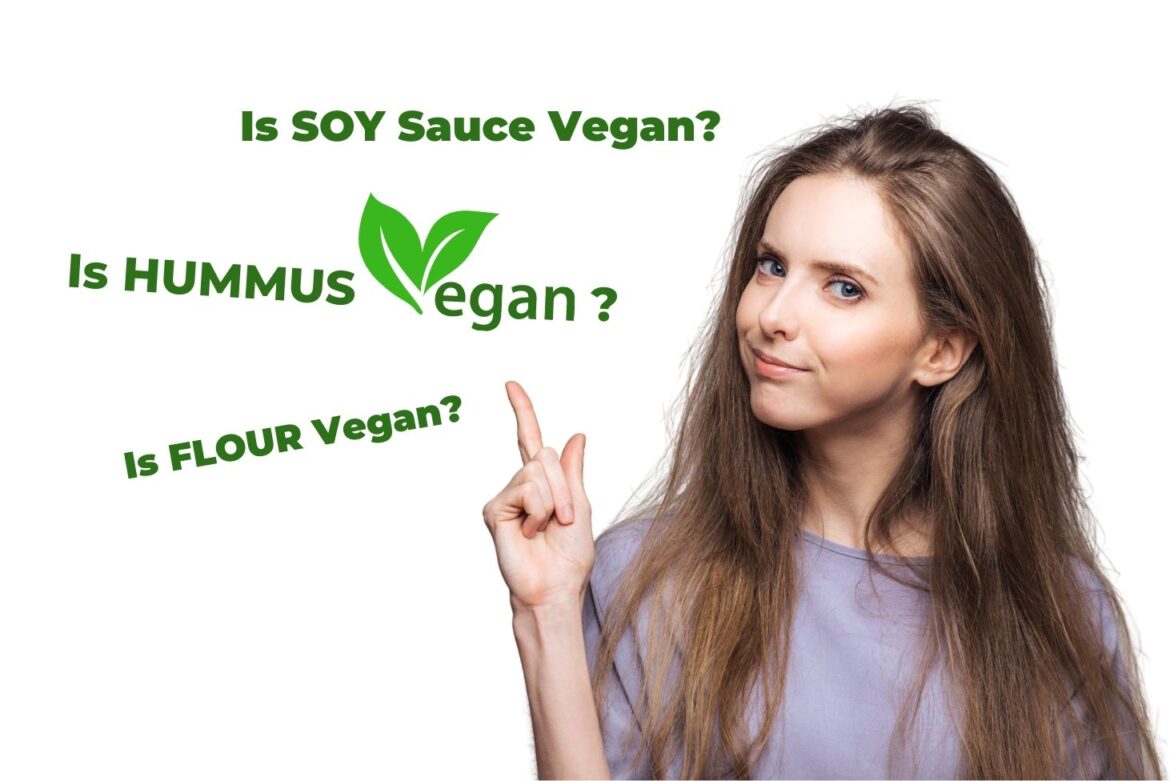 If you want to find out the answers to the most popular vegan questions, continue reading this article and find out what products are vegan and what not.

Soy sauce is the result of fermented soybeans in salt and water, so yes, soy sauce is completely vegan. If you are also looking for gluten-free soy sauce, opt for tamari, which is soy sauce but without gluten.

Yes, hummus is vegan. The main ingredients in hummus are cooked chickpeas, tahini (sesame seeds butter), olive oil, garlic, and salt. Store brought hummus also has preservatives and additives, so it’s best (and much tastier) to make it yourself.

Yes, ketchup is vegan, but always read the label. Some ketchup brands may contain animal-derived products, such as whey protein, and milk powder, which makes them not vegan. Needless to say that most store-bought ketchup is loaded with high-fructose corn syrup and natural flavorings (which usually is another term for MSG), so watch out. Healthier versions for ketchup, that are also vegan are Sir Kensington’s, OrganicVille, Yo Mama’s, and Primal Kitchen.

Yes, Swedish Fish candies are vegan. However, they contain some of the most dangerous food colorings and are basically 100% sugar. If you’re vegan for health reasons too, opt for a more natural version of Swedish Fish gummy candy, such as vegan fruit rolls or vegan caramels.

Yes, lactic acid is vegan. To not be confused with lactose, which is a milk compound. Edible lactic acid is a natural acid that forms through the fermentation of carbohydrates and is mostly found in pickled vegetables, and fermented foods.

Takis may not be vegan, actually. As it is written on their package, the chips are produced in a facility that also processes milk and eggs, which is why Takis may contain traces of animal products. This makes them not that vegan, actually. More so, the seasoning, the artificial flavoring, and the colorings added to them make Takis one of the worst junk food out there, so opt for more natural vegan snacks instead, such as chickpea puffs or non-GMO corn puffs.

Yes, Crisco is vegan. The all-vegetable shortening is a soybean and hydrogenated palm oil-based product. If you want a healthier vegan alternative to Crisco, opt for refined coconut oil or coconut butter.

Most xantham gum is vegan. However, depending on the culture used to ferment it, some xanthan gum producers may use animal-based products to produce it. Hence it’s best to ask the producer. Healthier alternatives to xanthan gum that are also vegan are guar gum (made from guar beans), chia seeds, and flaxseed.

No, Doritos are not vegan, they contain milk ingredients, except for 3 of their flavors, namely Spicy Sweet Chili, Blaze, and the Toasted Corn Tortilla Chips. Healthier vegan alternatives to Doritos are Beanfields and Beanitos.

Cheerios are not vegan, they contain Vitamin D derived from lanolin that comes from sheep and honey, which is considered not vegan by a large part of the vegan community. But there are vegan alternatives to Cheerios that are way healthier, such as Awsum Snacks, Forager, Nature’s Path, or Seven Sundays.

Boba, the tapioca pearls for the famous Asian bubble tea are mostly vegan, but not all brands. Some boba contain sodium dehydroacetateis or E266, a highly toxic food additive that is not compatible with a vegan diet. Vegan boba options are the Instant Boba and The Premium Bubble Tea Kit from Locca.

Vegan Questions In a Nutshell

Now that you know the answers to some of the most popular vegan questions online, here is my take on veganism. Becoming vegan should not solely resume to one particular reason, such as being vegan for the animals. When we open our hearts to the world and become more empathic, the need to protect the animals instead of eating them is a natural consequence.

Being vegan just for the sake of not eating animals or animal products is sometimes not enough because a lot of the vegan options out there, such as synthetic vegan meats, egg replacements, nutritional yeast, and dangerous food additives that have nothing to do with leading a compassionate lifestyle.

As vegans, we should have this compassion for ourselves too. While a lot of the “foods” above may be vegan, it doesn’t mean that they should be part of your regular diet too. Eating a healthy plant-based diet with little to no junk is a duty we have for ourselves too, and the whole world.

Read Also: 9 Healthiest Fruits in The World and Why

9 Delicious Forgotten Veggies and How to Cook Them