The Extraterrestrial Underground Base Found in Bucegi Mountains Romania 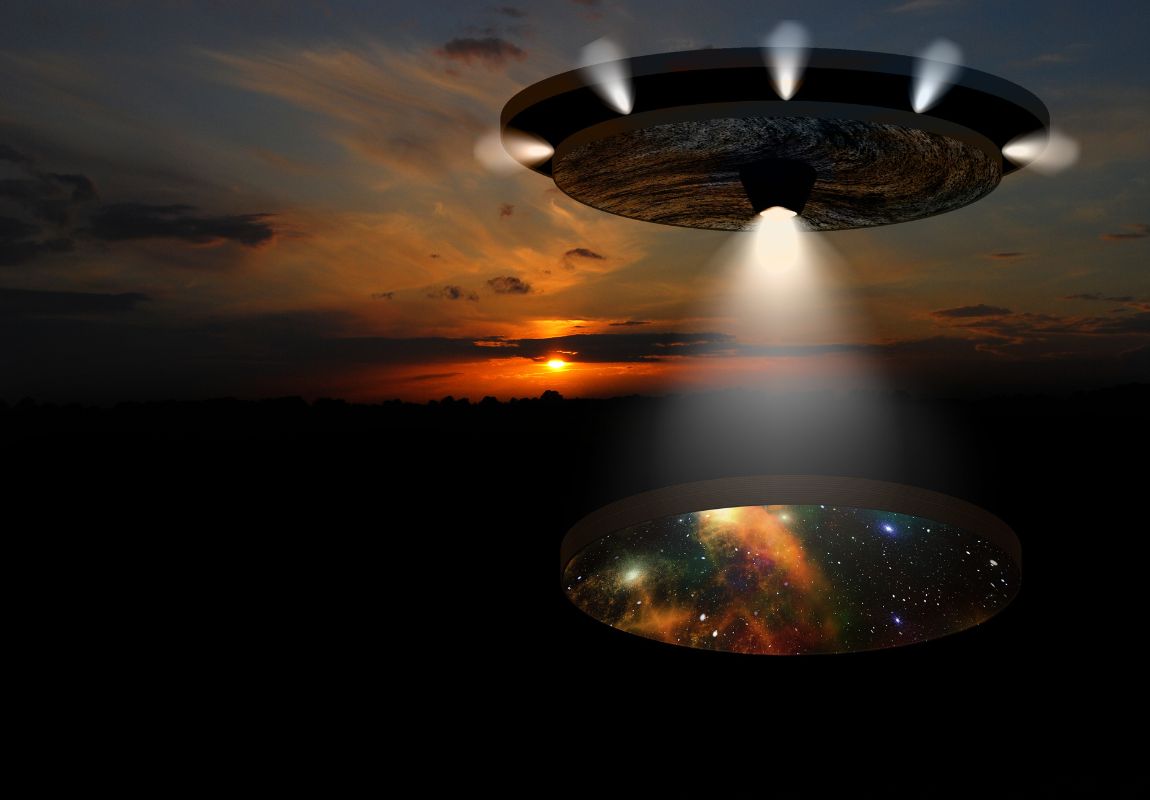 Want to learn more about the extraterrestrial underground base found in Bucegi Mountains Romania? Continue reading.

On August 11, 2003, rumors began to circulate about the discovery of an extraterrestrial underground base in Romania. According to reports, a team of scientists and researchers had stumbled upon the base while conducting a geological survey in the region. The base, which was reportedly located deep beneath the earth’s surface, was said to be filled with advanced technology and artifacts of unknown origin. Some even claimed that the team had encountered extraterrestrial beings while exploring the base.

Does The Extraterrestrial Underground Base in Bucegi Mountains Actually Exist?

In the book, Cinamar claims that the base is located beneath the Romanian village of Peștera, which is situated in the Bucegi Mountains. The base is said to be located deep within a network of underground tunnels and chambers and is reportedly home to advanced technology and extraterrestrial beings. Cinamar also claims that the base is connected to other underground bases around the world, including ones in Egypt and Iraq.

“Viitor cu cap de mort“ (which literally translates into “Future with a death’s head“), or Transylvanian Sunrise in English is a book written by Romanian author Radu Cinamar that purports to describe the discovery of an extraterrestrial underground base in Romania. According to Cinamar, the base was discovered by the Romanian military in the 1990s and has been kept secret ever since.

In the time of the Dacians, it is said that these tunnels were known only to priests and a few chieftains. The tunnels had either a strategic role, or they hid the treasure of the nation, and the secret of the underground network in Bucegi reached only those who were meant to protect it.

Regardless of its veracity, “Viitor cu cap de mort” has gained a significant following in Romania and has spawned numerous theories about the alleged extraterrestrial underground base. While the existence of the base remains unproven, it continues to capture the imagination of many readers and has sparked debates about the possibility of extraterrestrial life and hidden knowledge.

Despite the lack of concrete evidence to support Cinamar’s claims, “Viitor cu cap de mort” has gained a dedicated following in Romania and has spawned a number of conspiracy theories. Some readers have even claimed to have personally visited the alleged underground base, describing it as a vast and technologically advanced facility. Thus, the book has been translated into many languages worldwide and continues to gain more and more believers in this theory.

In addition to the claims about the extraterrestrial underground base, the book also touches on other controversial topics such as time travel and the manipulation of reality. Cinamar asserts that the technology in the base has the ability to manipulate time and space and that the extraterrestrial beings living there have been visiting Earth for thousands of years. Overall, “Viitor cu cap de mort” is a highly controversial and disputed book that has generated a great deal of debate, but there may be some truth to it.

In addition to Radu Cinamar’s book, there have been other mentions of the existence of the extraterrestrial underground base in Bucegi Mountains. One of which is that according to scientist Valentin Tîrcă, the last king of the Agathîrs Empire from above ground, Valentin Thrcaar the XVII-lea or Valentin Tîrcă after his Romanian name, the Carpathian Mountains are an artificial construction that has been built millions of years ago by extraterrestrials coming from The Draco Constellation.

According to him, the undergrounds of the Carpathian Mountains, especially the Bucegi area is still inhabited by Agathyrsi, highly evolved beings that, after the devastating 1800s earthquake have retreated into the mountains, but still protect the surface lands. The Agathyrsi did not belong to the Scythian cultures (as Wikipedia claims), who were nomad cattle-raising warriors from Asia. They were a sedentary peaceful population inhabiting the highlands of the Carpathians and were natives to these lands belonging to the large Getae-Thracian population. The Dacians were their armed troops.

In short, Valentin Tîrcă claims that the Bucegi Mountains are an artificial construct by the Draco extraterrestrials and that the undergrounds are still inhabited by highly evolved beings that once lived on the surface of the Earth, but retreated into the undergrounds. This potentially explains all the anomalies, unexplained phenomena, and mysterious events surrounding the Bucegi Mountains of Romania, namely:

2. The “Izvor” Tunnel Underneath Bucegi

In 1913, The Romanian railways began constructing the tunnel “Izvor”. It was supposed to connect Prahova County with Dâmbovița County, through the Bucegi Massif. The CFR (Romanian Railways) approved the project and it was decided to build the Târgovişte – Pietroşita – Sinaia highway through the mountain. Therefore, the decision was made to break the Bucegi Massif, in order to shorten the distance between Moroieni and Sinaia.

Unfortunately, the outbreak of the First World War in 1914 led to the cessation of the works, which were resumed only in 1938, but they were once again abandoned. Even today, the reason why the construction was not completed is not known. What’s more, one of the entrances to the tunnel was sealed closed.

What did they find underneath the Bucegi Mountains that made them cease the construction? Nobody knows, and the construction of the “Izvor” tunnel is still surrounded by myth and mystery.

But “Izvor” was not the only railway tunnel dug underneath Bucegi Mountains veiled in mystery. In 1924, the building began of the longest underground railway tunnel in Romania, known as the Teliu Tunnel. The tunnel was traversing the Bucegi Mountains, linking Transylvania to Moldavia. The locals still remember the horrifying moments experienced by their parents and grandparents, who worked in the mountain galleries.

During the works, walls broke, there were methane gas emanations, which caused burns to the miners, and when the work on the big tunnel had reached halfway, the gallery broke, trapping 30 workers underground. The misfortunes continued until the day of the tunnel’s inauguration, at the beginning of 1929, when even the engineer Coltână, the one who supervised the construction of the tunnel, died under the horrified gaze of those gathered.

The misfortune has continued until this very day and the traffic through the tunnel was interrupted on June 30, 2018, after the railway bridge at Budila was destroyed by a flood on the Tărlung river. Coincidently or not, a Dacian citadel was discovered on the territory of Teliu, equipped with three defensive ditches, probably dating from the 1st century BC.

3. The Web of Underground Tunnels of Romania

Former Romanian general turned author, Emil Străinu is another public figure claiming that there is a net of underground tunnels underneath Romania. In his book “The Secrets of Underground Romania”, following rigorous and extensive scientific documentation, the author describes in detail the objectives of the entire territory of Greater Romania. We’re talking about underground cities, secret tunnels and canals, shelters and secret hiding places, and other secrets. He describes a secret and mysterious world that has always existed with us and … underneath us. Could this net of underground tunnels have been built by alien civilizations living in the underground, and be linked to the extraterrestrial base in Bucegi?

We now have at least three sources that claim that there is an extraterrestrial underground base in Bucegi Mountains. Is this enough evidence to start making some more digging around the subject, or is this something we’re going to label as a conspiracy theory to shut it down?

Theories Around The Extraterrestrial Underground Base in Bucegi Mountains

Despite the lack of concrete evidence, the story of the extraterrestrial underground base in Romania continues to captivate the imagination of many people. For some, the prospect of an underground base filled with advanced technology and artifacts of unknown origin is simply too intriguing to ignore. Whether or not the base actually exists, the idea of extraterrestrial life and the possibility of other worlds and civilizations continues to capture the imagination of people all over the world.

Over the years, various groups and individuals have claimed to have new information or evidence about the alleged base. Some have even claimed to have accessed the base themselves and to have brought back artifacts or other proof of its existence. There are many theories and speculations about the nature and purpose of the alleged extraterrestrial underground base in Romania.

Regardless of its true purpose, the story of the extraterrestrial underground base in Romania has inspired a wide range of speculation and debate. Some people are convinced that the base exists and that it holds the key to unlocking some of the greatest mysteries of the universe. Others are more skeptical.

The Official Narrative About The Extraterrestrial Underground Base in Bucegi Mountains

No official statements were made by the Romanian government or any reputable scientific organizations, and there were no photographs or other forms of documentation to back up the story. Despite the lack of evidence, the story of the extraterrestrial underground base in Romania may have some truth to it. Some people even claimed to have personal knowledge of the base or to have encountered extraterrestrial beings themselves.

Ultimately, the truth about the alleged discovery remains a mystery. However, for those who believe in the possibility of extraterrestrial life, the prospect of an underground base filled with advanced technology and artifacts of unknown origin is an intriguing and tantalizing one. Regardless of the truth, the story of the extraterrestrial underground base in Romania remains a fascinating hypothesis that is worth further exploration.

Mysterious Underground Bases Around The World

Whether or not these stories are true, they serve as a reminder of the many mysteries and unknowns that still exist in the world around us. And for some people, the prospect of discovering the truth about these mysteries is a tantalizing one, a quest that may well continue for many years to come. So, the search for the truth about the alleged extraterrestrial underground base in Romania, and for answers to the many questions it raises, may well continue for years to come.

While there have been occasional reports or rumors about new developments or discoveries related to the base, there has been no solid evidence to support these claims. It is certainly possible that the extraterrestrial underground base in Bucegi Mountains could exist, but we need more research on the matter. If we continue to have a closed mind regarding extraterrestrial civilizations and their existence among us, we will never even investigate the hypothesis at hand. Let us know in the comment section below what is your opinion on the extraterrestrial underground base in Bucegi Mountain.