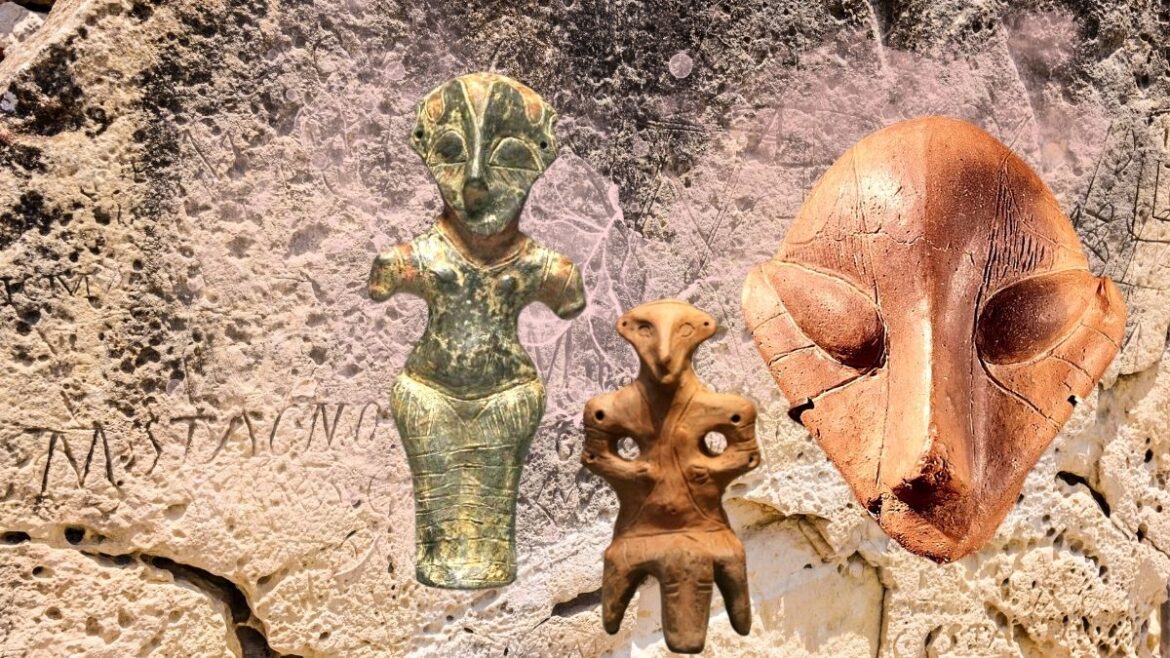 Want to learn about the mysterious Turdaș-Vinca culture? Continue reading this article and discover the less known facts about this forgotten ancient European culture.

Vinca culture is one of the first ancient Eastern European cultures, dating around 7000 years BC. Vinca, also known as Vinca-Turdaș, after the Serbian and Romanian localities where most of the ancient vestiges of this civilization were found, was part of the Old Europe cultures, around 1000 years older than Sumerian culture. Vinča artifacts have been found in a vast area comprising Serbia, Romania (particularly Transylvania), parts of Bulgaria, Kosovo, Bosnia, North Macedonia, and Greece.

The Vinca civilization was thriving in the lower Danube basin over 7000 years ago, forming the old post-apocalyptic European cultures of the primordial Golden Getae, who saved the seeds of peoples having escaped from the waters of the last great planetary flood. Here are the 9 most obscure facts about the mysterious Vinca culture.

9 Facts About The Mysterious Vinca Culture

9. The First Metal Culture of the Neolithic

According to the University of Belgrade professor and expert in the Vinca civilization, Nenad Tasic, the Vinca culture was an advanced and refined society enhabiting the lands of Serbia, Romania, Bulgaria, Macedonia, and Hungary today over 7000 years ago. In Balkanic Peninsula, he stated the following:

Starting from the type of glass manufactured from volcanic stones, analyzed at the University of Berkeley, we began to have a complete picture of these people. They mastered ceramics and decoration techniques. They were fishermen, farmers, hunters, shepherds, miners, and stone cutters. They were even metal craftsmen, as evidenced by various tools found. Vinca-Turdaș culture and the beginnings of civilization in Europe.

The Turdaș-Vinca culture, while considered a Stone Age (Neolithic) culture, was in fact a culture of metallurgy (copper and bronze artifacts were discovered, which means that they practiced metallurgy). This makes us think that they were very advanced for their times.

You may think that such an old civilization had little to no fashion sense, and they dressed in sheep’s skins and rags, and their houses were made of straws and sticks. While this may be expected from an 8000 years old civilization, we beg to differ. After analyzing the artifacts of the Vinca culture, some other unexpected conclusions were drawn.

In the Turdaș-Vinca culture, people lived in wooden and clay houses, made with a mix of clay and straw, arranged along streets and without gardens. Their houses were tidy and they worked very beautiful terracotta dishes and plates. Even more, interestingly, they painted their houses purple in most cases. This means they had good knowledge of chemistry.

7. The Inventors of The Mini Dresses

The people of this culture were not dressed in furs and were neither skimpily dressed, but instead wore clothes similar to our modern clothes, made of textile fabrics that they woven in looms, dyed with pigments, and sewn with different decorative patterns, as we see today in Eastern European folk clothes. Indeed, the Turdaș-Vinca people used certain minerals to make pigments and paints, including mercury sulfate.

They used this chemical compound to prepare their precious red ocher paint, oftentimes used to paint their clay figurines, but also medicines. The same red color was used to dye the natural fabrics from which they made their clothes.

Their women were a-shaped skirts with linear and square motifs, very fashionable for those times. The Turdaș-Vinca people were lovers of all things beautiful and wore crafted delicate jewelry that they made themselves. Hence, they were not a savage barbarian society, but a refined civilization living in modern conditions for those times. According to archaeologist Julka Kuzmanović-Cvetković:

According to Miljana Radivojevic, a researcher at the University College of London’s Archaeological Institute, the first industrial revolution took place in 7,000 BC in the Vinca culture. These people left many copper artifacts, the production of which required a lot of expert work.

“What was discovered was presented in an exhibition and we can say that the results of this research will find a place in history books, in 5 or 10 years from now.”

It is safe to say that Vinca culture has developed very fine craftsmanship, metal technology, and writing, probably older than that found in the Middle East. The level of industrialization is so different from everything discovered so far. Vinca was a great culture and had the knowledge to create and invent independently, which is why we are talking about an industrial revolution.

The Vinca people did not use money but used shells as a form of exchange for the various products they made. Until this day, no weapons were found following the excavations. This makes us draw the conclusion that the Vinca people were not warriors, but a peaceful and gentle highly evolved society. It is unknown at this time what he will do after leaving the post. This adds up with the statements made by Romanian researcher Valentin Tîrcă, who says about The Agathîrs Empire, an ancient empire encompassing the areal of the Vinca-Turdaș culture.

He concluded that they were a peaceful, non-combative matriarchal society. The world’s oldest statue depicting a mother holding a child in her arms, called Madonna from Rast (from the Romanian village where it was found) dating 5,500 – 5,000 BC is a great symbolistic of the matriarchal, compassionate, and loving society of the Vinca-Turdaș culture. The bronze age female statutes of the Žuto Brdo-Gârla Mare civilization that has followed the Vinca-Turdaș culture, stand as proof that this matriarchal society long-lived in time. The Danube civilization of Gârla Mare is considered to be the most important representation of Bronze Age art (1,600 – 1,150 BC) in Romania.

Even more, the inhabitants of these lands did not eat meat or drink wine, and lived in communion with nature and each other, following the philosophy of the circle society, in which everyone is equal. The Romanian/Balkan dance called “hora” stands as proof over the millennia of the peaceful circle societies enhabiting these ancient lands.

Needless to say that a sedentary, peaceful civilization is also a highly evolved one from the spiritual point of view. Hence, they made their own entertainment and “invented” toys (but also games). In their homes, they had tens and hundreds of such miniatures of human statues, furniture objects, animal miniatures, etc. We can say that the Turdaș-Vinca people invented the first toy figurines for the entertainment and education of their children, as it seems they were particularly interested in their children’s education. The toys that they made are small, representing people, animals, tables, pots, and small utensils.

While it may seem they were clumsily made, the toys of the Turdaș-Vinca people are similar to the toys our children use today. In addition to toys and games, these people also invented the modern “spa” (Pločnik, Serbia), the first hot spring, and mineral water baths and pools for fun and for health benefits.

Excavations in the vicinity of Belgrade have revealed more than 2,000 of these mysterious figurines. Most ancient illustrations or figurines depict strange humanoid creatures with oval-shaped heads, huge eyes, and specific dark eyes. These strange humanoid forms are described as guard deities, some of them being considered good, while others evil. Researchers are still to give us a satisfactory answer as to what these statues actually represent, as they most certainly are not human figures.

Could these be statutes of extraterrestrial beings that have visited these lands thousands of years ago? As human history still cannot explain many artifacts and ancient buildings, the probable answer is yes. If we couple this with the fact in close vicinity, Romania is the ancient Agartha (land of Agathârși) built by extraterrestrials from Draco Constellation, things seem to add up.

2. Oldest Writing in The World

Another mystery of the Turdaș-Vinca culture is the incised signs on the terracotta vessels, which for years have been pushing Serbian and European experts to do new research to discover their significance. Danish professor and anthropologist Kaj Birchet Smith has discovered that the oldest writing dates back to 4,000 BC, belonging to the Sumerian culture of Ur, but 1,000 years earlier than the Sumerian writing, there was the Turdaș-Vinca writing. The first-ever known writing in the world.

While the Sumerians had 15,000 letters (signs), the Vinca people have only 40 known symbols, and it is not known which group of peoples they belonged to and what language they spoke. However, if we put the puzzles together, it must have been the ancient Agarthians (Agathyrsi Empire), the predecessors of the Dacians, inhabiting the lands of today’s Romania, parts of Serbia, Bulgaria, Albania, Hungary, Ukraine, and basically the entire lower Danube river, the center of Old Europe and the birthplace of European civilization.

To back my hypothesis, the oldest ever discovered writing comes from Tărtăria, Romania, where in 1961, three mysterious clay tablets were excavated, also known as the Tărtăria Tablets. Tărtăria is in the center of Transylvania, is only 30 km away from Turdaș, the Romanian locality which gives the name to the Turdaș-Vinca culture.

1. The Beginning of The European Civilization

While most people still believe what the history books say, namely the fact that these “primitives” lived very little and hid in caves, scared by the weather phenomena that they did not explain. Looking at the artifacts of the Turdaș-Vinca culture from 7000 – 8000 years ago, we realize that they had a fairly high level of development.

They were peaceful. They had rituals, they had customs, and traditions, but they also abide by natural laws of respect for others and nature, all is one and one is all, they lived in perfect harmony and understanding, something we rarely see today with all this amazing evolution. A set of mysterious laws, known as the Belagines that stem from this ancient civilization, speak about the kind-heartedness of the peoples inhabiting the lower Danube basin. What we have today is actually an involution from what once was a highly spiritual culture and civilization, the Turdaș-Vinca culture, the beginning of the European civilization.

The Unique and Mysterious Turdaș-Vinca Culture

Thousands of years before the building of the Egyptian pyramids, somewhere between the 5th and 3rd millennia BC, there was a European culture that stretched around the Danube River, on the territory of Romania, Serbia, Bulgaria, and Macedonia, but obvious traces of which are found throughout the entire Balkan Peninsula. That is the Turdaș-Vinca culture.

In addition to being part of the oldest known human civilization, part of Old Europe civilizations, together with Cucuteni, Boian, Gulmenița, Hamangia, Starčevo-Criș cultures, Vinca culture is also one of the most mysterious ancient human civilizations as most people know little or almost nothing about it.

Read Also: Agartha Is Real and Is Located in Today’s Romania

However, just because for one reason or another, one of the oldest human civilizations is less mediatized compared to Sumerian culture and others, is just because our focus in searching for the hearth of where human civilization initiated has been derailed. In the years to come, I feel confident that history will need a complete rewrite based on actual facts and not agendas, so we can finally know the truth about our history and where we come from.