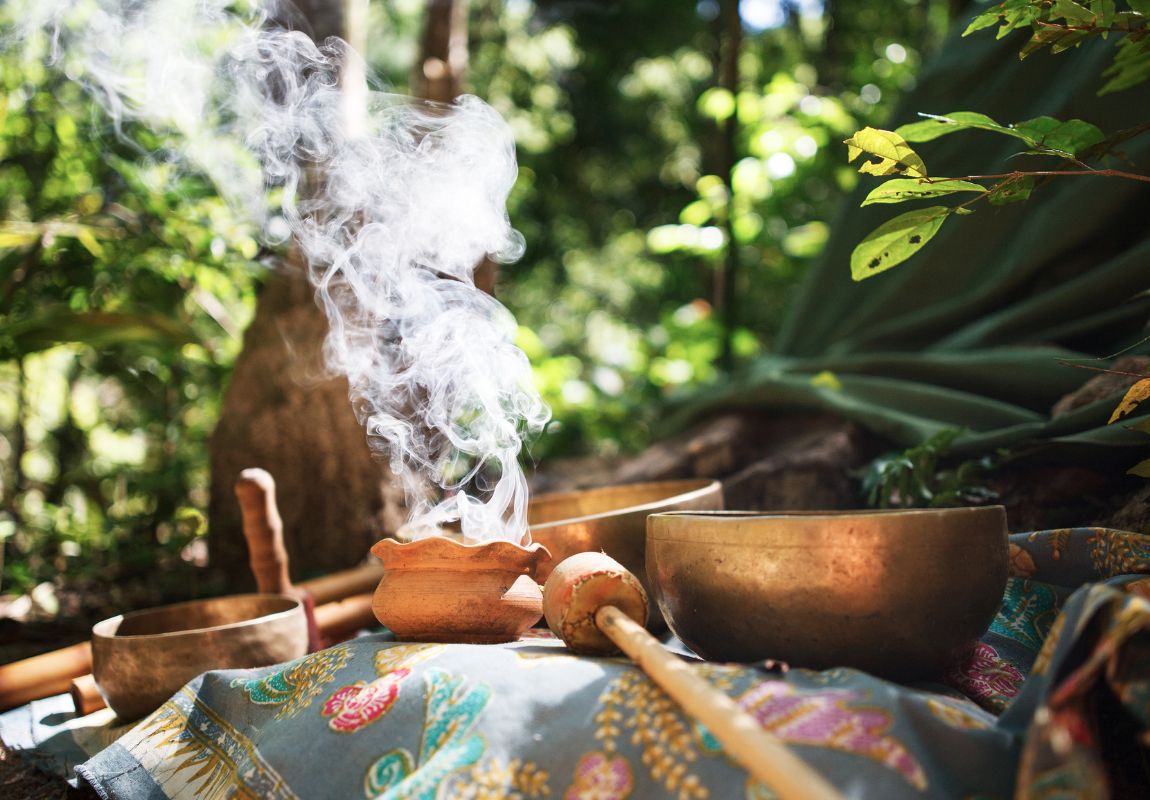 Want to find out what are the highest natural sources of DMT? Continue reading this article and find out what they are and how to grow them at home. But first.

DMT (dimethyltryptamine), also known as the God particle is a natural substance produced by the pineal gland in the human body. DMT is a primal constituent of life on Earth and its role is to connect the physical with higher realms of our consciousness that we cannot sense with the physical senses. This is why when the pineal gland works normally, we have enough DMT in our body to develop extraordinary psychic and intuitive abilities.

What Is The Use of DMT?

DMT is found in all plants and animals, in smaller or larger quantities, and you can use it for extraordinary out-of-body experiences and spiritual lessons. In addition to developing extrasensory perceptions, DMT can also put one in contact with extraterrestrial beings. According to the English researcher Terence McKenna,

“During a DMT trance you have the opportunity to meet various entities. In fact, they represent a reflection – until then hidden and suddenly released – of your psyche”.

DMT is a spiritual teacher of the self. It’s your higher self reconnecting with your physical self in the hopes that you will re-member yourself into the divine, infinite being that you are. It is a valuable spiritual awakening tool. We figured to share with you the highest natural sources of DMT you can use to elevate your spirit and connect with your higher mind.

For the Amazonian natives, ayahuasca constitutes a so-called “key drug”. Since ancient times, ayahuasca has been used during special ceremonies, in the hope of having spiritual revelations and divinations, and for spiritual initiation journeys. These distant “journeys” would allow the user to visualize events that happened in the past and even future events. Even occasional users – quite a large number – of ayahuasca have claimed the power of clairvoyance that this drug gives.

The vine bark of caapi is more often used to prepare a brew, but it can also be smoked, or sniffed. It’s improper to say that this tree is one of the highest natural sources of DMT, as it actually contains high levels of monoamine oxidase inhibitors (MAOIs). These substances potentiate the psychoactive properties of other plants that it’s brewed together with. This is why the ayahuasca brew is always prepared together with chacruna (Psychotria viridis), or chaliponga (Diplopterys cabrerana), both containing high contents of DMT, but also with other stimulating plants.

How to Grow Banisteriopsis caapi at Home

Is traditionally used as an additive to ayahuasca brew ceremonies in South and Central America. This is why chacruna literally means to mix in the native Shipibo-Conibo indigenous people’s language. Since 1992, chacruna is legal to use, as a traditional drink with ayahuasca in Brazil.

The dried plant contains approximately around 0.1% to 0.61% dried mass of dimethyltryptamine (DMT) and is one of the highest natural sources of DMT. The alkaloid content is said to be highest in the morning.

How to Grow Chacruna at Home

It is a shrub native to the Amazon Basin, and it grows in Brazil, Colombia, Ecuador, and Peru. The Quechua people call it chaliponga or chagropanga, and is very popular in eastern Ecuador. Is commonly added alongside chacruna to ayahuasca. It is a climbing shrub, and the DMT in its leaves is believed to potentiate the psychedelic effects of ayahuasca.

The plant stores the alkaloids N,N-DMT, 5-MeO-n,n-DMT, and N-methyltetrahydro-beta-carboline in its leaves and stems. According to different sources, the DMT content in the dried leaves can vary from 14.6 mg/g to 1.7 mg/g, making it one of the highest natural sources of DMT.

How to Grow Chaliponga at Home

Part of the same family as charcuna, nyakwána specifically grows from Panama to Brazil, in humid forests below 800 m elevation. In addition to being one of the highest natural sources of DMT, the stem bark hydroethanolic extract of this tree is traditionally used for the treatment of stomach pain, indigestion, and gastric ulcers. Shamans in Venezuela smoke the bark of V. elongata or sebifera “in dances to cure fevers”, they also boil the bark and drink the liquor “to drive away evil spirits”.

The powdered resin of the Virola elongata tree has been used by the Yanomami people as an entheogen they call nyakwána. This resin is inhaled or “snuffed” through the nostrils in spiritual and religious rituals due to its high content of 5-MeO-DMT and DMT. Howerver, the highest DMT content in this tree is found in its flowering shoots, while the bark and the root mainly contain 5-MeO-DMT.

How to Grow Nyakwána at Home

The DMT content in the dried root bark of this tree ranged from 1.26 to 9.35 mg/g for these samples, according to this study, making jurema one of the highest natural sources of DMT. The stem bark has about 0.03% DMT.

How to Grow Jurema at Home

The bark of the tree is rich in tannins and one of the highest natural sources of DMT, as well as 5-MeO-DMT. The smoke of the inner bark of the tree is used by shamans of the indigenous people of Venezuela to lower fever and body inflammation, while the bark brew is traditionally used to drive out evil ghosts, due to its emetic properties.

Closely related to Virola elongata, the virola nut’s bark contains 0.065% to 0.25% alkaloids, most of which are DMT and 5-MeO-DMT. The “juice or gum” of the bark seems to have the highest concentrations of alkaloids (up to 8%).

How to Grow Virola Nut at Home

The beans of this tree are used to make a snuff called vilca (sometimes called cebil) by the Tiwanaku, as well as the Wichi shamans, that call it hatáj. Recent archaeological excavations at the Quilcapampa site in southern Peru found that the Wari used the hallucinogenic seeds from the vilca tree in combination with chicha, or beer made from the molle tree. Due to its wide use in folk medicine, it is part of the Brazilian medicinal species with priority for conservation.

Traditionally, the bean pods are roasted to help remove the husk, ground in a mortar and pestle into a powder, and mixed with a natural form of calcium hydroxide (lime) or calcium oxide. The main active constituent of vilca is bufotenin, a DMT derivative but it also contains DMT and 5-MeO-DMT. This plant is one of the top natural sources of DMT.

How to Grow Vilca at Home

Is a perennial tree of the genus Anadenanthera native to the Caribbean and South America. In the past, Haitians consumed a sort of miraculous beans produced by this plant in the hopes of being able to communicate, and dialogue with the gods. Some tribes in South America, often combined small amounts of yopo beans with alcoholic chichas (maize beer) to enjoy its hallucinogenic properties. Some locals use various yopo bean preparations along with ayahuasca, as it contains (MAOIs). Occasionally ayahuasca is found mixed in with the yopo snuff.

The beans have been found to contain up to only 0.04% 5-MeO-DMT and 0.16% DMT, making it one of the highest natural sources of DMT. The leaves and bark also contain small amounts of DMT, 5-MeO-DMT, and related compounds. Usually, the yopo beans are snuffed or smoked.

How to Grow Yopo at Home

According to some exotic seed sellers, almost all Anadenanthera peregrina seeds on the market are actually seeds of Anadenanthera colubrina. They need the same growing conditions.

Lichens and mushrooms rarely contain DMT, but rather other psychedelic substances, but in 2014, Michaela Schmull analyzed the DNA sample of a new lichen species containing DMT, which he named Dictyonema huaorani. Huaorani is an alternate spelling of Waorani, the original native ‘discoverers’ of this species in Ecuador, who call it nɇnɇndapɇ. She and her team identified in the lichen tryptamine, psilocybin, and 5-MeO-DMT, as well as 5-methoxytryptamine (5-MeOT), 5-MeO-NMT, and 5-methoxytryptamine (5-MT).

Fascinating, however, Dictyonema huaorani is a very rare species, and you can hardly grow it yourself, as you have to find it first. This is not the first presumably psychedelic lichen, since there is another hallucinogenic lichen growing in Iceland called Parmoterma (Parmotrema menyamyaense), which has led to the myth of flying reindeer.

How to Grow Yopo at Home

Given it’s a lichen, Dictyonema huaorani can hardly be cultivated and grown at home.

Read Also: 9 Amazing Psychedelic Mushrooms that You Can Forage Yourself

If you’ve enjoyed discovering the highest natural sources of DMT, please share this article so more people can use this information. Remember that DMT is a highly valuable spiritual teacher, reconnecting our physical, material bodies with the infinite intelligence that we call source. So use it wisely and with the utmost respect.

7 Feel Good Movies About The Beauty of Life in...

The 8 Teachings from Zalmoxis’ School of Spiritual Mastery

9 Most Powerful Crystals for Abundance & How to Use...